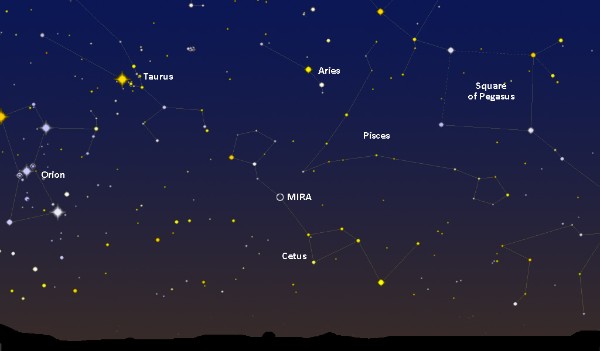 The star Omicron Ceti, Mira, has a special place in the hearts of variable star observers, as it was one of the first stars to be recognised as being variable. It spends most of its time well below naked-eye visibility, but then over a matter of just a few weeks it brightens up and again joins the constellation pattern of Cetus.
It was this behaviour, first spotted in the 16th century, that earned it the name of Mira, meaning ‘Wonderful’. Until that time, stars were supposed to be fixed and unchanging.
Mira has recently brightened and is now again just visible to the naked eye, though at the moment it is still around magnitude 5, which is on the verge of visibility from most UK locations. However, it should get brighter, as its maximum is expected to be in a month or six weeks, around mid to late January.
A normal maximum is around magnitude 3.6, which would make it visible from typical UK suburban skies but not dramatically obvious. However, because the star is brightening fairly early in its rather irregular cycle of around 332 days, it could be that it becomes significantly brighter than usual, so it is well worth watching out for.
The peaks of 2007, 2010 and 2011 all reached around magnitude 2, so Mira then became virtually the brightest star in Cetus. In some years, maximum occurs when the star is too close to the Sun to be observed, but the coming maximum will take place when the star is easily visible in the evening sky.
Use the chart here to pick out Mira, which is best found by first using the stars of Aries to locate the brighter stars of the Head of Cetus, which is shown by a polygon just above Mira itself.
To make estimates of its magnitude by comparing it with nearby stars, take a look at our Variable Star Section’s news story, which provides a list of comparison stars and their brightnesses. There is also a link to more information about Mira.

http://www.popastro.com/variablestar/news/newsdetail.php?id_nw=587
2. The latest edition of Sky at Night Magazine (January 2018) also has information about Mira (p.59) as well as an article by Paul Abel on how to estimate the brightness of variable stars. ( p.79/80)
Clear skies
Pete Hill

This site uses Akismet to reduce spam. Learn how your comment data is processed.