Since retiring a year ago I have rekindled my casual interest in astronomy by taking an online Astronomy GCSE course, joining the RAG and visiting places of astronomical interest, such as the world famous radio telescope at Jodrell Bank, Cheshire. During my visit there on 1 February 2018, a famous astronomer, Dame Jocelyn Burnell was delivering a lecture on her discovery of pulsars in 1967.  She’s famous not only for this discovery but also for her controversial exclusion from the Nobel Prize in Physics for the discovery.

Although the radio telescope is an impressive feat of technology and engineering, the highlight of my visit was the lecture. The event sold out shortly after Christmas and so all 200 seats in the auditorium were occupied, she was obviously very popular with the astronomer fraternity.

She explained that the objective of her PhD was to discover more quasars (quasi stellar radio sources) but first she had to build her own radio telescope, and for this, like all fellow astronomy students back then, she was given a tool-kit; rugged pliers, wire snips and a screwdriver! Cambridge still used valves in their amplifiers, although transistors were available at the time! The new telescope covered several acres, used miles of cable, took 2 years of working in all weathers to complete and worked first time! It was a fixed structure, with no control over its direction. 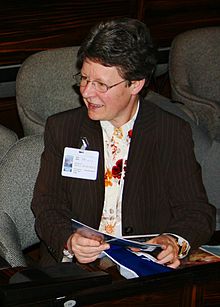 She confessed to being so surprised at getting into Cambridge University that she was sure the University had made a grave mistake and she would be thrown out as soon as this was discovered. In the meantime, she would work flat out to get as much done before this happened. This, she said, was the incentive that drove her to work long hours and to accept the brunt of supervisor’s caustic comments.

The main task was inspecting miles of printout for anomalies and it was not long before she found one…then another…and another. It was a sign of the times that her supervisor (and recipient of the Nobel Prize) was arrogantly dismissive of her excitement and was told the source was not from outer space because of the pulse’s incredible regularity, it must be man-made interference.  And so began a laborious period of eliminating all possible spurious radio sources; badly suppressed vehicles, radio waves reflected from a corrugated iron shed roof and even from the Anglian Police Force radios. With an ironic smile she recalls telling her supervisor that if a vehicle was to blame it was setting off at 4am, then at precisely 4 minutes earlier each day and had been doing so for the past 2 weeks! The source was clearly emanating from the same point on the celestial sphere. With wry humour, she told how she played along with notion that it could be a man-made source, labellng the first anomaly or ‘bit of scruff’ as LGM-1; Little Green Man-1.

She recounted that to check the recurrence of one source she would need to be using the telescope at 2am but she was due to go to her home in Ireland with her fiance that day to announce their engagement…she duly stayed up all night and also made it home. Such was her determination.

With standard plotting paper speed the anomalies were too compacted to be analysed accurately, so the paper speed had to be  increased. But this meant each paper roll would last only 20 minutes. The solution was to only increase the paper speed just before the predicted time for the repeat showing of the anomaly. Unfortunately, this meant going out to the telescope control shed in the middle of the night sometimes.

We now know (partly due to astronomer Sir Fred Hoyle) that the anomalies are pulses from neutron stars rotating very rapidly and with incredible regularity, the LGM-1 has a rotation period of 1.3 seconds. Strong radio signals are emitted along the axis of the magnetic field and because this is inclined to the axis of rotation, the radio beam points in the direction of Earth once each rotation, causing it to pulse like a beam of light from a lighthouse. 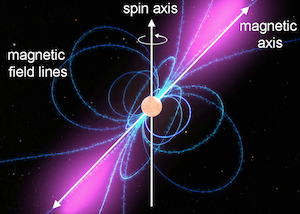 During an interview with a reporter from the The Guardian she was asked what the new stars were called. Burnell said she had been too busy to think about it. The reporter suggested an abbreviation of pulsatiing radio star, and that was agreed.

During the post lecture questions Burnell was asked by one of the school children in the audience about being overlooked for the Nobel Prize. She has obviously fielded this question may times and her stance is well known; research supervisors take the flak if the project flops and the credit if it succeeds, no matter how well, she explained. In those days, students were regarded as ‘support’, the ‘labourers’ poring for hours over paper charts, whereas the supervisors initiate and direct the research and as such deserve the credit. She is clearly not bitter, and has received many other accolades and honours as ample compensation. She claims that by not getting the Nobel Prize, she is in good company. She is right, take a look at the achievements of Cecilia Payne-Gaposchkin (composition of the stars) and Henrietta Leavitt (Cepheid period/luminosity), both worthy candidates.

This site uses Akismet to reduce spam. Learn how your comment data is processed.